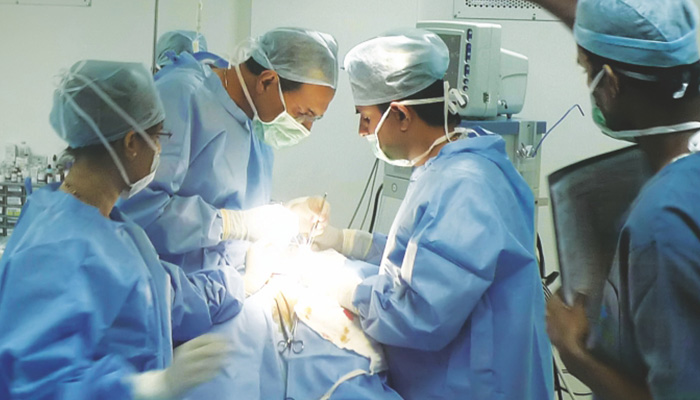 An open procedure used to be the surgical method whereby the patient’s abdomen was opened and the biliary tract was examined in a traditional manner by the surgeon. In the late 1980s, laparoscopic surgery became the popular method of removal of the gallbladder. Laparoscopic surgery was touted as causing less pain to the patient and a shorter recuperative period.

Surgeons who were in active practice in the late 1980s oftentimes went through training which included proctoring at their hospitals by qualified and experienced laparoscopic surgeons. Medical students began laparoscopic training in medical school and were not required to undergo training after medical school.

Because there are variations in the biliary anatomy, most surgeons agree that the safest practice is to perform a cholangiogram before a transection of any duct. A cholangiogram is a test where dye is introduced into the biliary system and outlines the system so that the anatomy is more readily identified. A cholangiogram is a safeguard for the patient since it helps to confirm that the surgeon has properly identified the anatomy and also the lack of any ductal injury. It also confirms that a gallstone is not obstructing the biliary tract below thereby eliminating a possible problem requiring re-invasive treatment at a later time.

Surgical journals reveal that many iatrogenic (“physician-caused”) injuries during laparoscopic cholecystectomies are oftentimes due to lack of experience. The Southern Surgeon’s Club reported that the new laparoscopic technique resulted in a learning period. The learning curve reflected a higher incidence of bile duct injury. The Southern Surgeon’s Club’s study found that within the first 13 cases of any participant’s experience, the bile duct injury rate was 2.2%, compared with 0% after the 13th case. During the initial 12 – 13 procedures the surgeon is on his “learning curve”. Another cause for injuries is the surgeon’s overconfidence resulting in failure to meticulously dissect and conclusively identify the biliary anatomy prior to transection.

The Society of American Gastrointestinal Endoscopic Surgeons (hereinafter “SAGES”) sets forth well-established principles for the prevention of injury during laparoscopic biliary tract surgery:

Because the cystic duct and cystic artery are the structures to be divided, it is these structures only that must be conclusively identified in every laparoscopic cholecystectomy. Accordingly, the cystic duct and artery should not be clipped or cut until conclusively identified. To achieve conclusive identification, Calot’s Triangle must be dissected free of fat, fibrous and areolar tissue and the lower end of the gallbladder dissected off of the liver bed. (The latter is an essential measure that precludes the possibility of injury to an aberrant duct.) At the completed dissection, there should only two structures seen to be entering the gallbladder, and the bottom liver bed should be visible. Note that it is not necessary to see the common duct. It is at this point that the surgeon has achieved the critical view of safety and the cystic structures may be occluded because they have been conclusively identified. Failure to achieve the critical view of safety because of difficulty of dissection as a result of inflammation or any other cause is an absolute indication for cholangiography or conversion to open cholecystectomy to define ductal anatomy.

If an injury is recognized early, it can be repaired by the surgeon and the patient stands a much greater chance of no resulting complications. Therefore, the standard of practice requires the surgeon to search for potential injuries prior to completing the surgery. The omission of cholangiography increases the odds of an injury failing to be recognized.

Injuries to the biliary tract can have a devastating impact on a patient’s life. Injuries that are discovered post-operatively should be referred to a specialized center with expertise in hepatobiliary surgery because the first attempt at repair is critical. The biliary ductal anatomy often has modest blood circulation when healthy. After an injury, a stricture or narrowing of the duct or lumen may occur due to inadequate blood supply and/or scar tissue. Further, studies show the probability of increased risk of stricturing after the initial stricture as well as increased mortality.

Repair of an injury to the common bile duct by the surgeon involves bringing up a loop of the small intestine and suturing it directly to the remaining duct. A Roux-en-Y hepaticojejunostomy is a surgical procedure often used to attempt to repair bile duct lesions or injuries high (towards the liver) on the bile duct. A hepaticojejunostomy involves removing a 8-10 inch loop of bowel from the small intestine, suturing one end closed, suturing a top portion of the loop to the remaining bile duct, and re-suturing the lower end into the intestine. Strictures also occur at the site of the anastomosis or the location where the remaining duct is sutured to the loop of intestine.

Cholangitis is infection or inflammation of the bile ducts. Since the ampulla of vater no longer is present in the injured patient, the sphincter of tissue that normally control the flow of bile from the common bile duct to the small intestine is no longer present. Therefore, the bacteria and other matter present in the small intestine can flow up the previously “sterile” biliary duct to cause infection possibly extending into the liver. Antibiotics are used to treat the cholangitis which is then usually resolved but may re-appear intermittently. Severe cases of cholangitis can be life-threatening particularly after several episodes due to the effect on the ducts and possibly the liver.

After a repair surgery, stricturing and re-stricturing occurs unfortunately. Many studies reflect that only 10-28% patients undergoing hepaticojejunostomy in these circumstances experience a stricture of the ductal anatomy. However, these studies arguably include “selection bias” of the physicians in choosing their patients reporting their results and the studies do not involve long periods of patient history review. Further, re-stricturing is more likely after an initial stricture. The author’s contact with experts reveals that strictures may occur as late as 20 years after the initial repair surgery. A minimum of 5-7 years is required in follow-up of the patient before a patient’s chances of stricture following a repair surgery diminish significantly.

In one patient’s case presently in litigation, the repair surgeon wrote in the Operative Notes that there was a 90% chance that the patient would completely recover from the repair surgery. Four months later, the patient experienced a stricture of the anastomosis or repair site, cholangitis, a balloon dilatation sequence involving two dilatations and repeated episodes of an apparent continuing peptic ulcer. Another result of the hepaticojejunostomy repair is that stomach acids no longer neutralize the bile as before. Rather, the bile acids directly flow into the intestinal loop and this can cause an ulcer as the acids inflame the intestinal tissue.

Another client’s experience began in 1990 when her bile duct was divided during a laparoscopic cholecystectomy. A cholangiogram was not performed and the injury was not diagnosed nor repaired until approximately 14 days later. This patient’s management has included two major surgeries (re-attachments) and numerous balloon dilatations of recurrent stricture. Therefore, the author suggests that an attorney practicing in this field of medical malpractice should not resolve his or her client’s case without an understanding of the significant and chronic risks facing the injured patient.